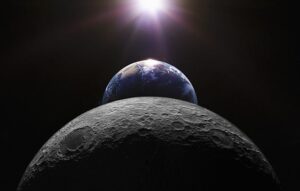 One of our most iconic and also well symbols is the moon. Its movement regulates the tides, and its ascent into the sky marks the approach of nightfall. It has influenced how we perceive and keeps track of time.

Due to the fact that a woman’s menstrual cycle lasts about as long as a lunar phase, it is strongly associated with femininity and fertility. We can see how the moon has

ingratiated itself into our beliefs and culture because all of these functions have solidified its connection to us. being also earth’s only natural satellite (a celestial body that orbits a planet).

It takes the Moon 27.3 days to make a complete orbit around the Earth, but because the Earth is moving around the sun at the same time, it takes the moon 29.5 days to go through its eight different ‘phases’ – a lunar month.2 for more read

For our main purposes we will be mainly focusing on New moon and full moon phases and what they mean and the opportunities we can find in the Financial market arena.

The full moon is the final phase of the lunar cycle. This is also the closest as we come to see the Sun’s illumination of the entire day side of the Moon (so, technically, this would be the real half-moon).

“It begins the process of going inward and tapping into your intuition. It’s a time to be more gentle with your energy and adjust your routine to honour the opportunity of transformation. So instead of a boot camp, try yoga or a long walk; eat foods that are warming and grounding, and conserve your energy.”

In financial terms, I’m thinking of a Correction or some sort of short-term condition of a pullback

When the Moon and Sun are at the same ecliptic longitude, it is called the new moon, which is the first lunar phase in astronomy.
The lunar disc is obscured by the Sun at this phase and is not visible to the unaided eye, except when it is silhouetted against the Sun during a solar eclipse.
The new moon is the most fertile day of the lunar cycle each month.
If there were anything new that could be started, it would surely be during the new moon.
The first moon of the lunar cycle, known as the new moon, is always the darkest.
Being near the sun and Earth, it will be a new moon.
The new moon is the best moon phase for monitoring other things.
Waxing Moon
The waxing moon is the opposite of the waning phase of the moon; it begins after the new moon and lasts until the full moon phase. The waxing moon’s energy is noted as overt, outward, and expanding; it wants you to spring forth and finish what needs to be done in order to make your dreams a reality.
Moon Phases

As we already stated, we will be primarily focused on the new and full moon phases as well as other articles on the moon as it transits through the different star signs and the messages it brings to help make an informed decision based on price action.

Moon in the signs...

Forex trading signals benefit both novice and experienced traders alike. This is because, ultimately, they are after the same thing – profit. We filter out only the best signal to send.

In our fast-paced society, every tool can be welded to our advantage.  Get a state-of-the-art signaling service straight to your phone where there are no boundaries.

There’s only one way to trade and that the disciplined way.